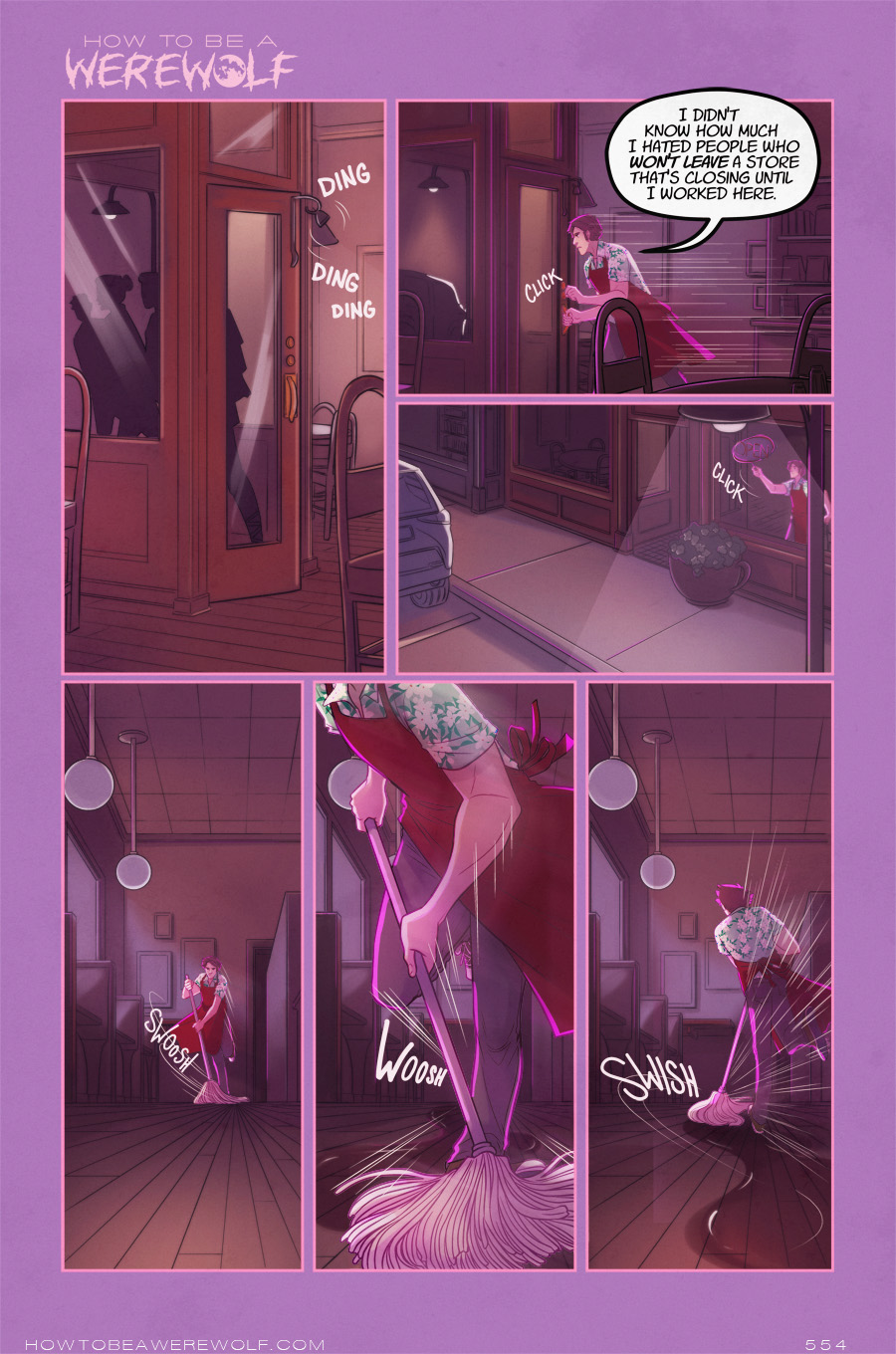 Vote over at TWC and you can see Elias being ridiculous about mopping (Side note, TWC changed their system so that creators have to actively update their listing to get votes, and I'm kind of thrilled? There are so many comics listed that haven't updated in years but end up at the top, I assume using bots.)

Don't worry, he's not closing alone! Though he probably could. I looked back and realized I never drew the cafe in Chapters 9 or 10, which blows my mind! We just were outside doing werewolf stuff too often! And chapter 8 mostly featured Elias trying to learn the ropes, so now he's a seasoned pro. (At mopping, at least.)

I hope you're all looking forward to Chapter 11! I've had fun writing it so far. I had expected a shorter chapter, buuuuut no. Never. It'll never happen again lol. I've already got a fun twist planned for the end of this chapter. I've mentioned this in my notes on previous pages, though I couldn't tell you exactly where anymore (sorry, I lose track), but I highly recommend learning how to write from a character first perspective. (I'd highly recommend The Art of Dramatic Writing by Lajos Egri and any of James N. Frey's books. I have no idea why they all seem to be in hardcover or Kindle only, but your library might have them. I'm supposed to mention those are affiliate links!)

The point of writing your story character first is that the plot is driven primarily from what a character wants or needs. It's driven by who they are as a person. So instead of aiming for "this is Shamaylin and she's super special and has a million awesome powers and her look is super edgy and her hair is neon green and pink!", you're aiming for "This is Mike, he grew up in a single parent household and he loves his dog. He failed math in 9th grade, but studied really hard and became an engineer. He dreams of joining Space League, but still has issues with self doubt and self-sabotage. Mike has never met an alien and is worried about how to socialize with people from different planets without being awkward." THAT is a character that gives you places to go. Every situation you throw Mike in, you can guess how he might act. You can set this character up for the audience and subvert their expectations from time to time to create tension and surprise. Mike feels like a real person who you can become invested in. Shamawow feels like a power fantasy that you're supposed to watch from afar. Don't aim to make the coolest character ever, aim to make a character whose journey you want to follow. Aim to make a character that comes from a place of vulnerability, not a character that's meant to make YOU seem cool and edgy. A character that seems very plain on the surface who does something unexpected or takes a big leap of faith will seem edgier than any character you could present to an audience as pre-packaged Pay Attention TO ME nonsense ever will.

Anyway, that's why Elias is mopping the floor. Character growth! Also this is a long-winded way for me to say that, as per usual, my dragging my feet to write this chapter was a non issue in the end, because I just looked for which character had a storyline that was hanging open (Charlene!), a Want that needed exploring (why am I in Michigan again? and what should I do with my life/career/witchcraft/etc), and then used that as a framework for what everyone else is doing. Elias has his eyes on going back to school (and Vincent), Malaya is trying to figure out how to deal with the new werewolves who are only kind of in her pack, the werewolf council is being a bureaucratic nightmare, Marin and Marisa have a house with way too many new guests in it, etc. You put up a frame, you build your house, then you decorate to make a cohesive whole. Bare walls aren't inviting, time to get some house plants.

Okay, off to finish my to-do list that's been hanging for weeks yaaaay. Including finally finally doing the shit I need to do to get more merch in my store and slapping cool designs on tshirts for you. I'm ahead on a few things and behind on everything else!

I made a TikTok?

I made a Fandom Wiki for HTBAW. I did very little to it, because I don't know what I'm doing and I'm too tired/busy to learn, but if you'd like to help edit it and add things, please feel free. Thank you to everyone who's contributed so far! It's coming along great! (I've also not had time to check into this, but I'm going to assume anyone who cares to update it probably has a thing for accuracy, so I'll periodically check to add things when I can. If you're working on it, please feel free to add any artwork from the comic or my Twitter that you'd like to the wiki, no need to ask. Artwork away.)

Feel free to check out my goofy Amazon store if you're so inclined, or I have some merch up on Society6 if you're looking for my old store link! Thanks to everyone who's come out to support me through Ko-fi and Patreon (links below, I'm too tired to link more things), you're really keeping me sane when the world is on fire :).