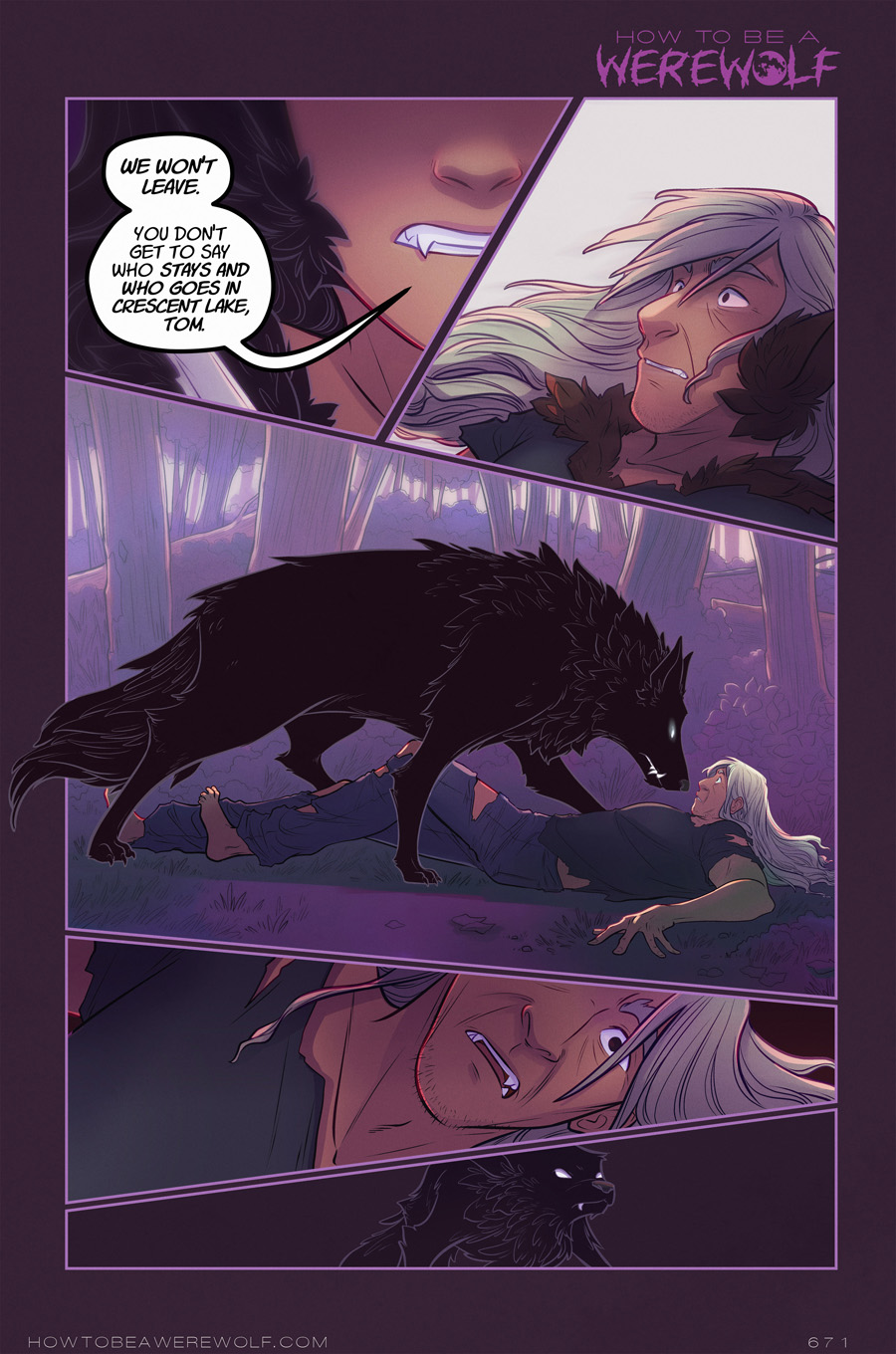 Vote at TWC and you can see some thumbnails, plus a little bit of next week's thumbnails but not enough to spoil things :)

My original plan for this chapter was to do short stories and give things time to breathe, but I couldn't think of anything, and it seemed like the pacing wouldn't work for shorter things considering Tom was out here breathing down everyone's neck. So then I was like, let's focus on Charlene! Cool! Okay, but what's Malaya doing? Nothing? Of course not, she has a traumatized pack to try and get in order so the council believes she can control Crescent Lake! Okay, so where's that whole storyline going? Are we just frolicking in the woods? No, because Tom is nearby. Well, how do you "end" a confrontation with goddamn Tom???

You turn into a giant wolf and stare at him, obviously. And he's Tom and he's complicated and has some shit going on, so isn't that a great way to drive the narrative forward for NEXT chapter using his issues? Yes, of course it is. And it worked great, because Mal's witch friends and heavy-hitter Marin are all out of the way, so her only other fallback who knows the ropes is Elias, so she's forced to step up even harder, the most werewolf ever, in a way she hasn't had to previously.

GODDAMN. When I say I don't really plan this story, I just sort of let it tumble out based on whoever the characters are and what their motivations are, this is what I mean. I know what most of these people want. If I don't know, I contemplate on it until I think of a good motivation for them that would drive their actions and use that to write scenes that will lead up to revealing that motivation more clearly later. Putting your characters ahead of your plot will almost always lead you to a much fuller story in the end, I think. Most people don't care as much about the details of the worldbuilding as much, or they care about it more if they like the core characters and story. If you put worldbuilding and plot before your characters, then you're trying to shove all your characters into a plot that they may or may not be suited to, and that may or may not pay off. You end up with a series of events acted out by characters, but not motivated by what natural choices those characters would make.

Anyway, please guess away at whatever is going on here, we'll resolve it more in the next chapter lol