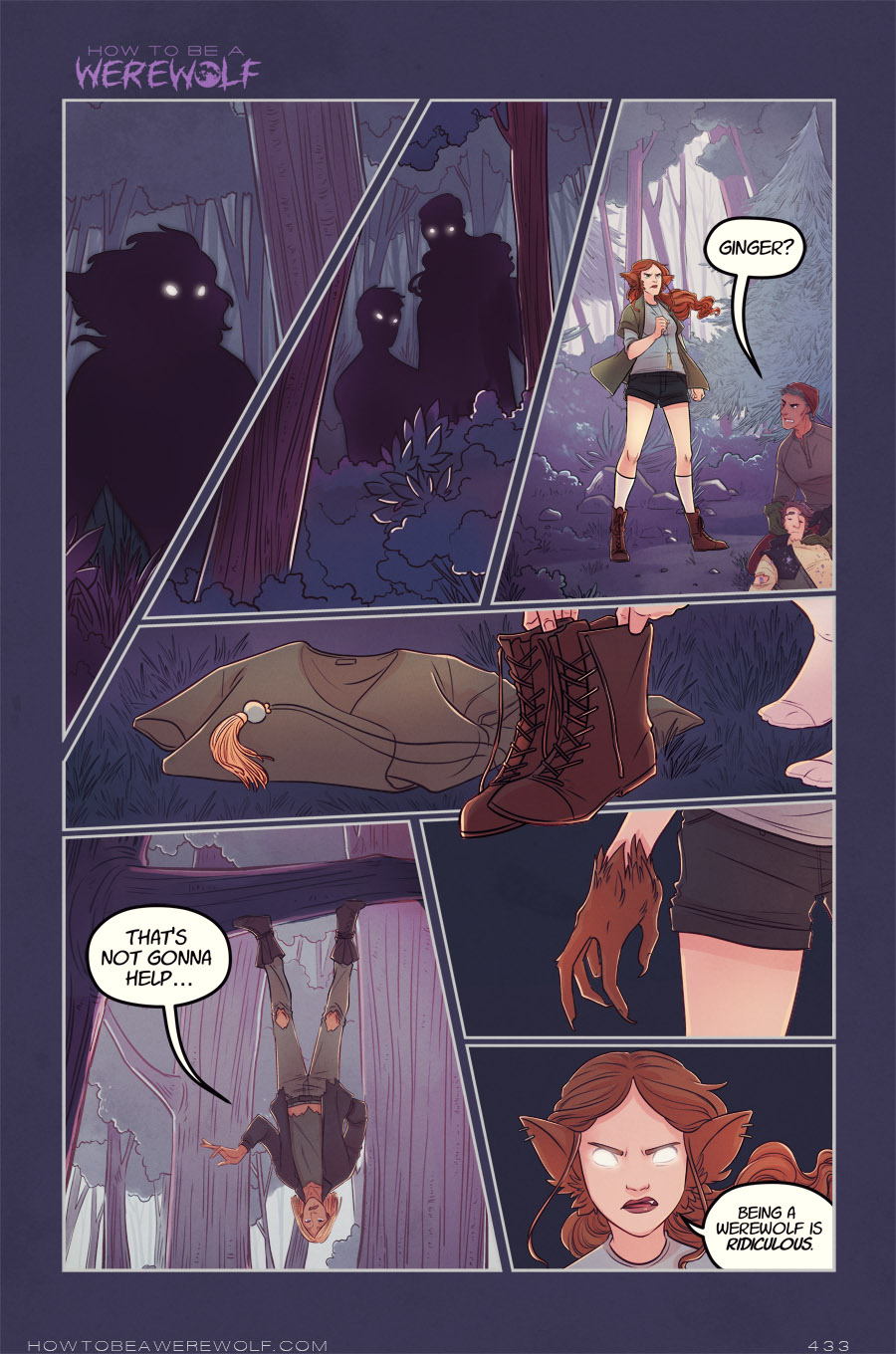 Vote over at TWC and you can see some thumbnails! Scribbles that eventually turn into pages somehow!

I have a store through Hiveworks now! Go get some cute things and nice prints! I'll add more stuff as I think about it!﻿

Oh, forgot to mention! If anyone sees any weird ads or ads that try to redirect you or seem like viruses or whatever, please send me an email so I can let Hiveworks know! If you can get me a screenshot, that helps a ton. The best things to help them shut down ads that are leaking into the ad network is a screenshot, what you're viewing the page on (Android vs Iphone vs computer) and whatever browser you're using. Thanks!

Strange figures in the woods! What's that all about?! IDK, but I'm sure we'll find out more and it'll continue being relevant because this story has like another four or five years left until it's complete whaaaaaat.

So, Ginger putting aside her clothes is a call out to the comic I made that led to me eventually making How to be a Werewolf, which to date is still getting notes on Tumblr somehow lol. (25k+ and counting!) This comic also features a proto version of Elias and Marin (and some very wobbly older artwork), which eventually led me to think about all the ways the werewolf narrative kind of ignores the various personalities and priorities of the people who happen to be werewolves. I use clothes a lot in this story, because I think there are a lot of ways in which we use clothing to define ourselves as individuals, and those clothes can mean anything from our personalities (Ginger and Malaya both exploring their options as a means of expressing their personal freedom) to our economic status (Elias having ripped most of his jeans and needing to be careful with money when buying a new pair) to our jobs (Marin and Marisa wearing suits and scrubs respectively). The clothes Ginger is setting aside here don't technically belong to her. At the start of the chapter, she's going through clothes that she's borrowed/been given by Marisa and Malaya (the only two people she knows who are about her size), so she sets aside what she doesn't want to get destroyed when she transforms.

Meanwhile, she's got a nerd and his unconscious nerd friend to protect lol. But she's smart, she'll think of something.

Apologies for not being around yesterday! I woke up at 3:45am to get dressed and ready to drive out to the polling place I was working at for our local primary election, and I was there from 5am til 7pm, then had to drop off all the ballots and supplies until 8pm...then had to attend two election parties briefly. My friends who ran won their races against their primary opponents, so they're going to be on the ballots in November! Very exciting. I'm slightly human today after getting decent sleep. Standing around in an elementary school gymnasium for fourteen hours isn't thrilling, but it kicked my ass more than I expected having to coordinate and run the polling place with four elderly people (one in his 60s, one in his 70s, and two women in their 80s). If you've never worked an election, I highly recommend it, though! You get paid (at least we do, and this is Indiana, so I assume most places would) and you get to meet a lot of people and learn how elections work much better. If you want things to change (or not change?), you have to be willing to throw down and do some work and learn who's actually facilitating said change in your community. The last few years have really opened my eyes to how much work and dedication it takes to get people elected, both as candidates and as city workers who make elections happen and run smoothly. I'm tired, but it's a good experience! And now I'm off to paint a door and eat some lunch and...stare at the walls, probably. I'm zonked!