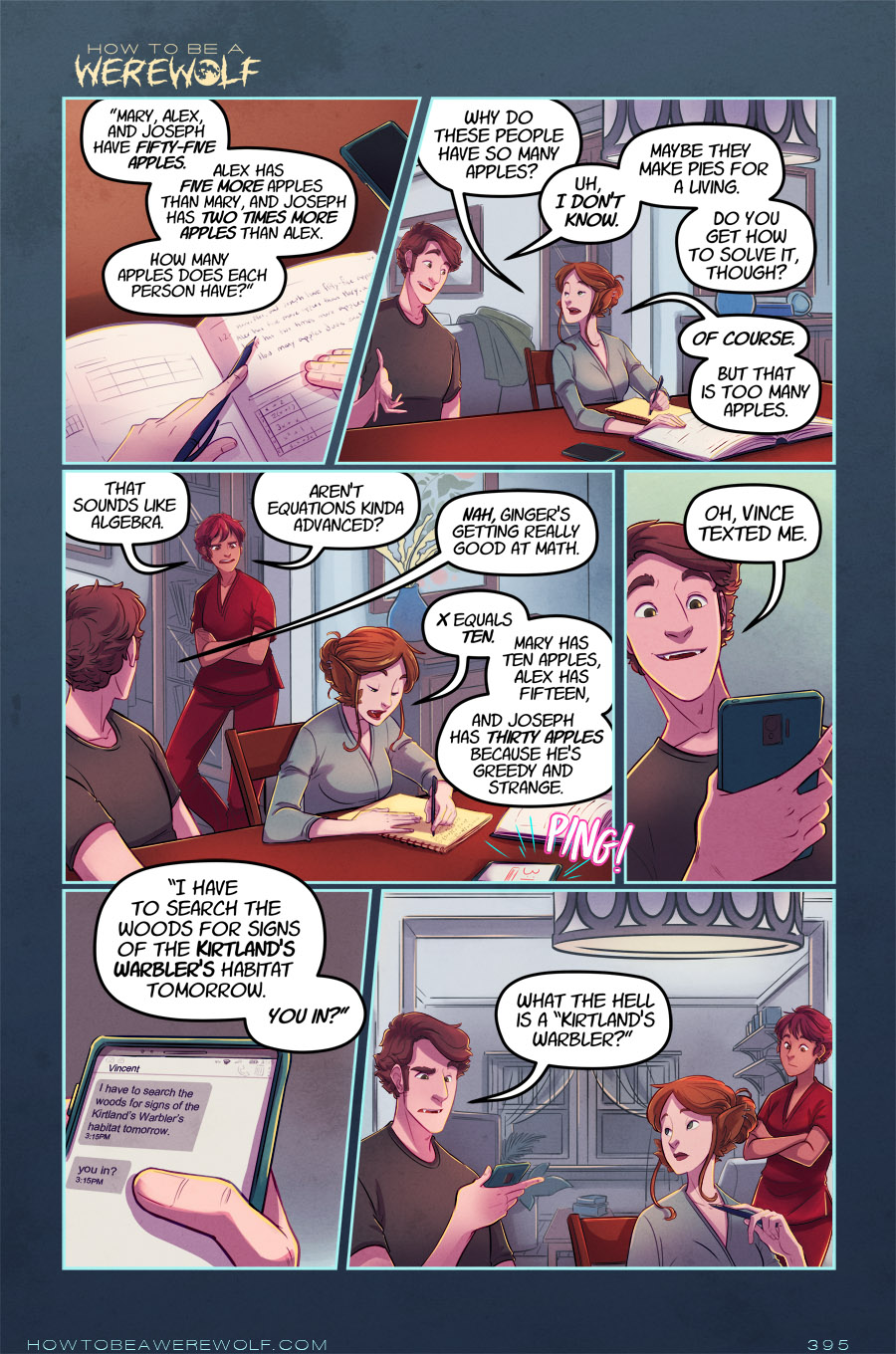 Vote over at TWC and you can check out the thumbnails from this page!

I like writing Ginger because she's one part naive, one part totally over it. She's not dumb, she just hasn't had the opportunity to learn much, so she's soaking up the chance now that she has it. Also, I checked that equation multiple times after modifying it from a pre-existing word problem I found, so it should be right. The math checks out if you work it backwards (ie the amount of apples each person has matches the amount specified by the word problem) so I should be good. I vaguely remember how to math.

Anyway, we're chugging along to actually get to the meat of this chapter, which mostly involves wandering in the woods looking for a bird. I know you're all very excited! That is an exciting premise.

Good news! I'm working with Hiveworks to get a Kickstarter going for the first volume of HTBAW next year :D. It'll cover the first six chapters and I'll be making a cover for it featuring new artwork. We haven't finalized anything as far as dates go, but hopefully pre-summer. I'll be maintaining the first 140ish pages of black and white, though they'll be spiffed up a bit and probably a bit of editing done on the dialog as I see fit. (I did take out quite a bit of cursing to tone this down to a PG-13 level rather than a "we can't sell that to children" level, but it still works well.) I'll keep everyone posted on how that's coming along! With their help, things will go much more smoothly than me just...struggling to do any of it. And they'll be distributing it, so you'll actually get stuff in a timely manner rather than me...crying in the living room, overwhelmed and frustrated that all the books I'm sending to people are covered in cat hair.

As I said yesterday, I'll be posting one page next week and one page the following week so that I'll be able to take a break for Christmas! I think rather than posting ON Christmas (which is a Tuesday), that week will have a holiday picture (same as last year, because I'm tired) on Tuesday and a regular page on Wednesday. I'm kind of disappointed because I'll be literally 3 pages short of 400 pages! It's so sad to end the year on page 397 instead. Luckily, time is a human construct, and so is the concept of a year, so reaching page 400 the second week of January is totally arbitrary :D :D :D