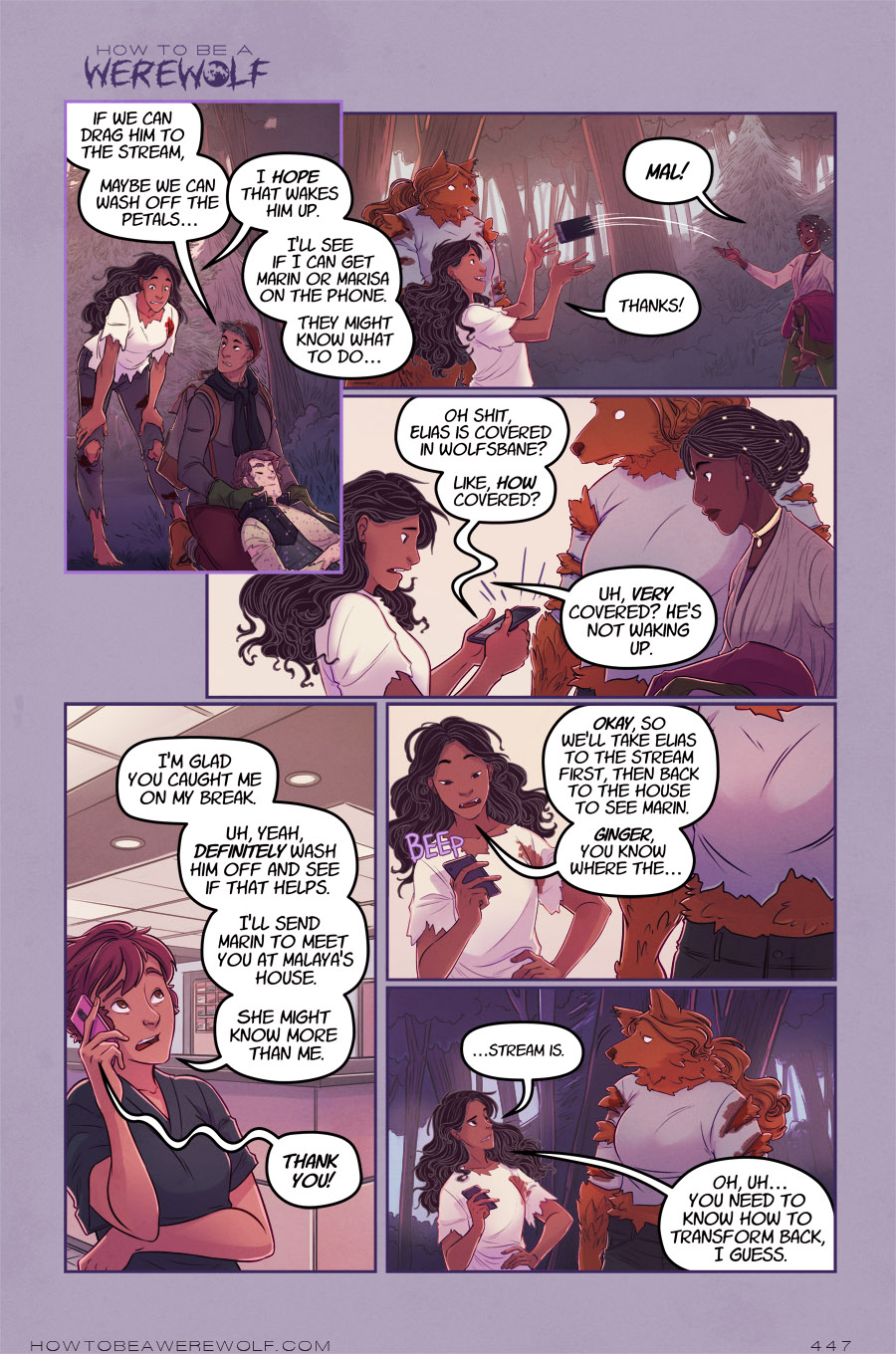 Vote over at TWC and you can see a panel I like of Elias being drowned from next week's pages!

Everyone else is figuring out their shit, and Charlene is off picking up after werewolves. She gets things done! Also, fewer issues with claws tearing things apart. It's nice to have regular fingers.

Based on what I know about nursing from my friends/family, they're nigh impossible to get on the phone because they barely ever have a chance to take a break and don't have the ability to check their phone on rounds (plus, that's a germ nightmare...phones are super gross). Anyway, everything is covered in MRSA, it's fine.

I'll admit that I had to look up how to draw Marisa, because I haven't had to since the beginning of this chapter. And minus the glasses, because they're hard to draw and I'm tired. She wears contacts to work.

Ginger's werewolf narrative is interesting to me, because it's very similar to Malaya's issues, but Ginger is doing a speed run. She doesn't have the same hang ups as Malaya has, so things are actually a lot easier for her. But she doesn't have the knowledge yet. So transforming one way or the other isn't an issue of anxiety or fear like Mal, it's an issue of "what do I do next???" and practice. She's just a giant, hairy babe in the woods. But this also makes my life easier, because I don't have to do a deep dive on Ginger's emotional situation every time she hits a werewolf milestone. Which is great, because I don't have time, and I like the contrast of her relatively laid back "I'm just gonna learn everything as quickly as possible, it's fine" approach to her massive life change. I like Ginger because she's no nonsense: she says things very directly, her thinking is straightforward, and she does whatever makes sense to her. She was kind of the coddled baby of Aubrey's pack, but now Ginger gets to spread her wings a bit and it's fun to write. I wanted the contrast of the traditional "cute girl" character with someone who's ambitious and candid.

Okay, I'm off to get my life in order! I'm trying to get my work done ahead of time so I have pages ready for when I go to Japan. Easier said than done, tbh! We'll see how far along I am by the time I leave. You'll get something at least! I've never had a deadline I couldn't meet with enough forethought. I also have a party next weekend for my birthday, so I'm trying to plan for that too. No wonder I need a vacation :D.