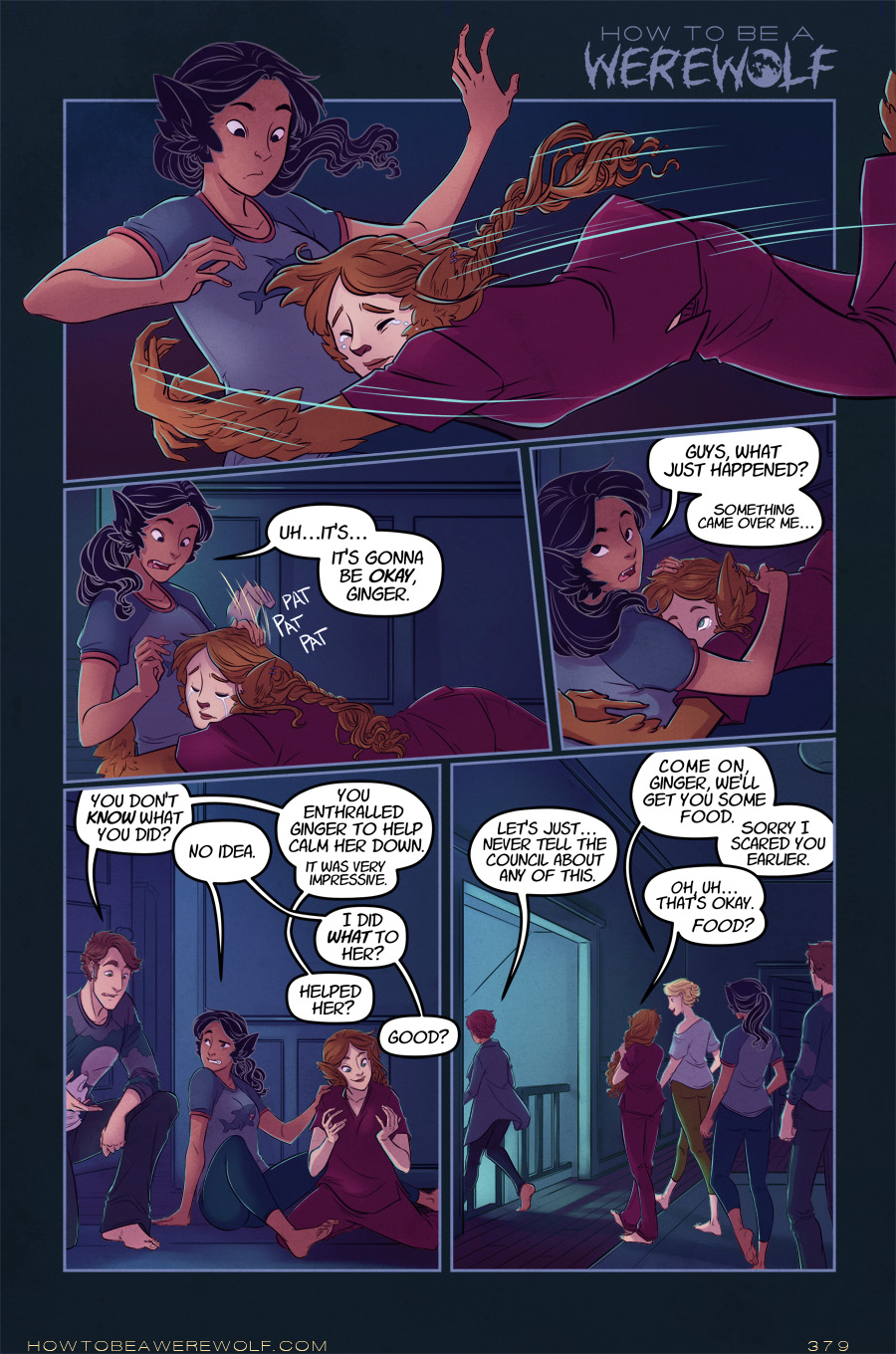 Vote over at TWC and you can see a familiar face from tomorrow's page! Which is also the last page of this chapter!

Oh man, chapter 8 is almost done! ALMOST DONE. Tomorrow is the last page! And then chapter 9 starts, but here's the deal: I am tired. So for next week, you guys will get the cover page and probably one more page. I haven't decided. There definitely won't be a cover plus two pages. I'll be taking some time off around Thanksgiving and Christmas, so I don't want to reduce pages too much before then. (And as per usual, "taking time off" means you'll get one page instead of two for a few weeks, because I'm nothing if not a workaholic.)

You might be saying to yourself, "Why would Ginger hug someone she's only met in person twice, once as a giant werewolf monster?" To which I say, "Don't worry about it, the next chapter will explain all that BECAUSE I HAVE ALWAYS EXPLAINED THINGS AND YOU NEED TO TRUST ME." And no, Malaya has not mind controlled Ginger, or violated her bodily autonomy, or any of the rest of that. Give me time to shove some more info about enthralling people in here and we'll all be fine.

Though there's a lot to be said about how the werewolf narrative overlaps with conflict regarding one's control over their own body and mind. I think that's what attracted me to using werewolves as the concept onto which I could hang this story, because it's both man versus nature AND man versus self. My main theme for this chapter ended up being control: control over others, control over yourself, control over your circumstances, etc. And in the end, no one really has control over anything, really. Connie tried to control Tom by getting pregnant and just ended up nearly beaten to death. Elias is trying to get some hold on his situation with Vincent, but is up against someone still figuring out their sexuality who needs space and time. The werewolves in the creepy house tried to escape, but were up against magical resistance. And Ginger is being bombarded with werewolf powers immediately after sleeping for weeks.

And then there's the idea that if a werewolf grabs you with her eyeballs, what effect does that have on you? Connie used Ziva's ability to enthrall the werewolves in her pack to grab on an immobilize Marin and Elias, but that doesn't mean that's the only purpose for this ability, or the only way it manifests. So we'll get to that next chapter! Because I am certainly not shoving more stuff into this one.

Okay, I'm off to finishing a bit on tomorrow's page and also to bathe my dog because she has a delightful film on her by this point. I'm lucky that she doesn't usually smell bad (or good...just neutral, slightly musty?) and her coat is always glossy, so I don't bathe her too often. I don't see the point, and she hates it, so once every few months seems fine. But she's shedding her summer coat and there are dog tumbleweeds showing up in every corner of my house and I'm tired of sweeping, so today's the day. Time to hit up the dog u-wash :p.