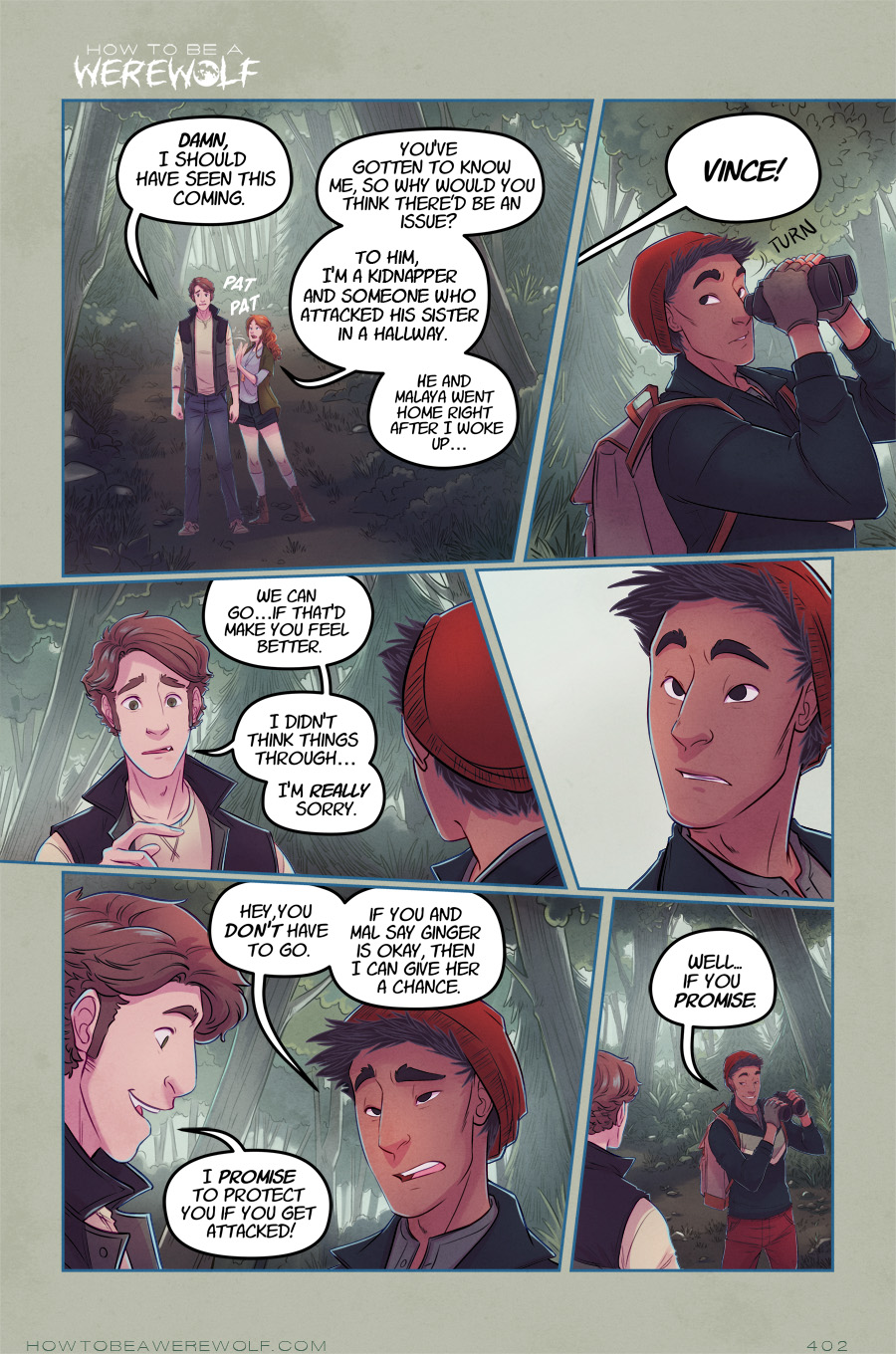 Vote over at TWC and you can see a panel from tomorrow's page of Ginger being confused!

The hardest part about writing this comic sometimes is figuring out how to let Vincent emote just enough to not make him a robot, but not so much that it goes against his stoic personality. It's a little hard to see in that last panel, but he's even vaguely smiling! (The hard to see part is somewhat intentional, because I didn't want his smile to end up being the big deal here lol.) He's on the verge of flirting even! But I can't go overboard, or else he wouldn't be his semi-Vulcan self. To be fair, Spock showed a lot of emotion for a dude raised not to have any, he was just very particular about them.

But we have a small endangered bird to find! So I can't spend all day on Vincent being pissy and passive aggressive lol. I've mentioned this on my Patreon posts from time to time, but I try to let the story unravel based on how the characters are thinking and feeling at any given time. I don't go for BIG plot points, just exploring whatever any character would do given the various events being thrown at them. So even though I'm trying to wrap up the bulk of this "I'm kind of mad at you" situation on this page, I can carry that undercurrent of emotion throughout the chapter instead of harping on it dramatically for longer. That feels more realistic to me? I think in real life, when you have a conflict with someone, it's natural to kind of patch it over quickly to get past the awkwardness, and then periodically have to work through things with the other person more as you realize you're still bothered. (Or work through things on your own to just get the fuck over it.)

Anyway, the point I'm trying to make is that the basis of how everyone acts for the bulk of this chapter is the emotions they feel on these pages: Ginger feels like a third wheel and is hesitant about Vincent, Vincent's disappointed and kind of jealous (looool), and Elias is eager to please to fix his fuck up. (Which, tbh, isn't that big of a fuck up...he brought someone along without asking yeah, but given the circumstance, it's understandable that he sees Ginger as harmless and in need of help with the werewolf thing. He's blown past the kidnapping aspect because that's not what he associates her with anymore in his own mind, whereas Vincent hasn't interacted with her since. Also, she's in the way of his original plans to get a better read on his own feelings, so he's being kind of a dick, which he occasionally is.)

Lots of thoughts this morning! I'm off to finish tomorrow's page, because coloring all these forests takes foreeeeever.