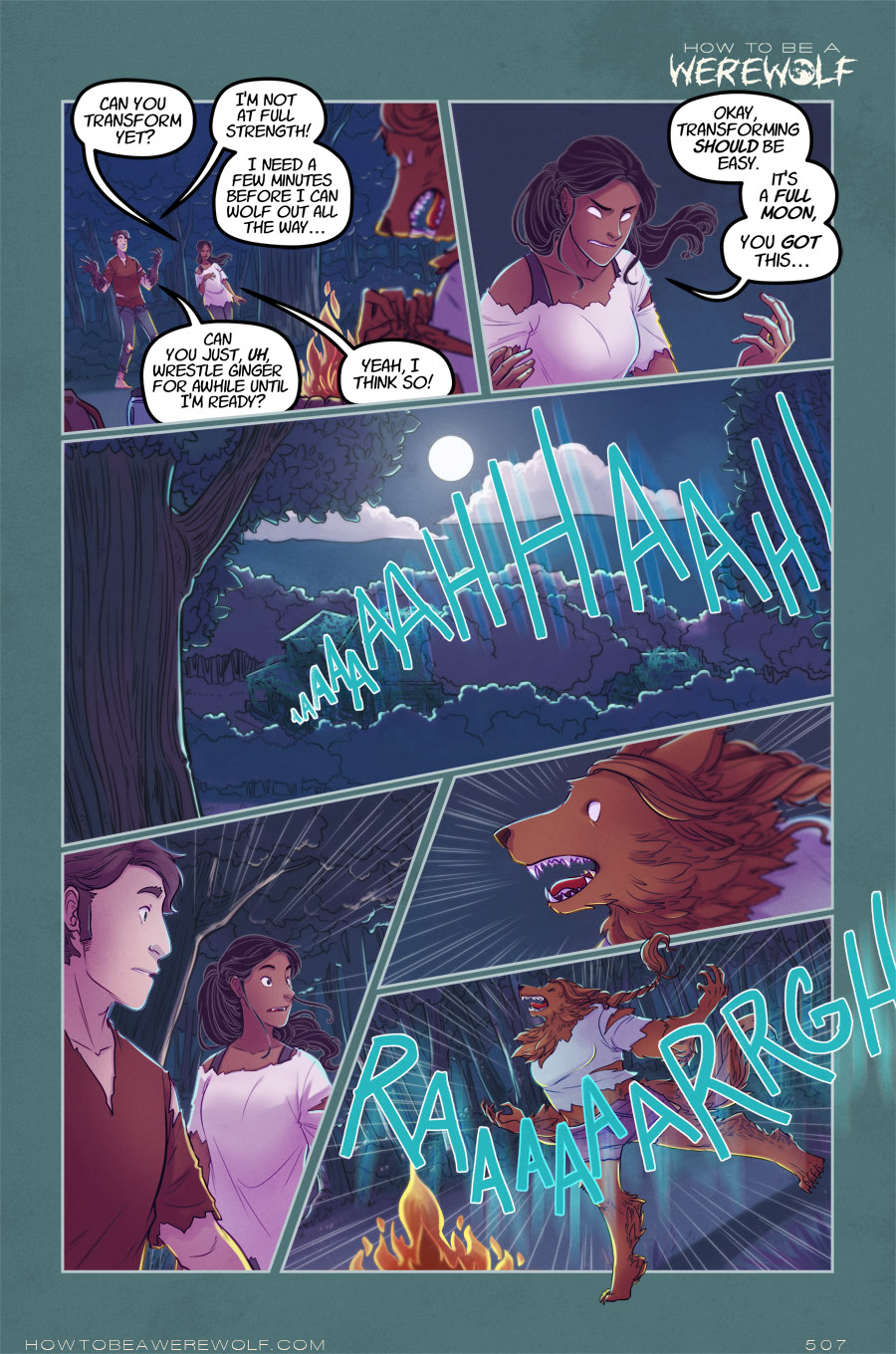 Vote over at TWC and you can see a panel from tomorrow's page of Elias looking very ready.

Oh no! Something is happening! There's screaming! Screaming is bad!

I originally envisioned this scene with Malaya at home, hunkered down for a full moon night, and then rushing off...but I realized that as the story progressed, she's so far from being on her own anymore, that it wouldn't make sense for her to spend a full moon by herself. I couldn't make it square with the story. One of the things I've learned from writing HTBAW is how often I have to plan ahead to set up the outcomes I want later. The reason Elias had to get hit by wolfsbane in the last chapter, and then drained a bit again by Charlene, is that by this point in the story, he'd naturally be the hero. He's stronger and more used to being a werewolf than Malaya, but having him at full capacity by this point would truncate her character arc. It's the same issue with Sara being around: if there's a beefy alpha werewolf with a lifetime of experience waiting in the wings, then why wouldn't she handle things instead? What I'm saying is that writing a coherent plot that takes advantage of your characters' journeys involves moving from the end back towards the beginning, rather than the other way around. If I want this character to end up at point B, where is point A? And who needs to be out of the way to allow them to get to that point?

(Then there is the further complication that you can't depower your other characters over and over to make the main character stand out, because they should be able to stand on their own amongst more powerful or skilled characters. Thus why Ginger needed to be "dealt with" in this part of the story, because Elias malingering any further is unrealistic to his character.)

Writing! It's fun! What a puzzle.

Anyway, today is Paczki Day! Which I'm sure I've mentioned before, because it's always on Fat Tuesday, and I post on Tuesdays. Paczki are Polish donuts, sometimes like a normal jelly donut, and sometimes they're more like a donut sandwich (a donut sans hole that's cut in half and then filling is piled in between). I've already shuffled my ass out of the house and bought five fresh paczki from my local bakery, and they're legit as hell. They start making them at like 3am and don't stop until early afternoon. This year, they had a Nutella mousse paczki, and it was great. Paczki Day is not really official, but there's a large Polish population in and around Chicago, so it' s become a bit of a tradition in communities with a lot of Polish immigrants. Historically, you're supposed to give up things for Lent, so from what I've read/heard, paczki were an easy way to use up extra lard and alcohol before being on your best behavior until Easter. Many places celebrate it on Thursday if they follow the Orthodox calendar instead. Personally, I'm not giving up anything for Lent because I'm a heathen who was raised without religion (or given my lifestyle choices, a very secular Mormon), but I sure do love fancy fresh donuts. Also, paczki come along right at the point in winter when my brain is screaming the most from the unrelenting cold, and this year is no different. It's a nice pick me up to keep me going.

And now, I'm off to the gym. I need to work off these fatty donuts :D.